You’re staring at the sky on a sunny day when you notice, in the corner of your eye, a transparent squiggle floating slowly across the blue. You try and focus on it, but it eludes your glance, refusing to be resolved. No matter where you look, the squiggle knows.

What you’ve got is a floater, a tiny piece of protein floating around the vitreous humor, the gel in the back of your eye. But for some people these floaters get worse with age and can become quite large. So a team of scientists want to know if they could safely treat these distracting dots with lasers.

Laser treatments have existed for at least 15 years, but there haven’t been other attempts to fix floaters with these specific lasers compared to placebos, the authors from Ophthalmic Consultants of Boston write in the paper published today in JAMA Ophthalmology. This is particularly important because of the strong possibility for a placebo effect.

The authors recruited 52 patients and put them into experimental and control groups. They treated 36 patients with YAG laser vitreolysis, which pulses a special kind of laser into the eye. Sixteen control patients instead received a sham treatment with a special filter and the laser on the lowest setting, preventing the laser’s energy from entering their eye.

Of the 36 patients, 19 said their negative symptoms were completely or significantly resolved—basically, four or five on a zero to five scale. None of the sham group said that—all of them said their negative symptoms were worse, the same or somewhat better. More importantly, 34 of the 36 patients in the YAG laser group lost most or all of their floaters, something that no members of the sham group reported.

The authors reported several limitations to their study—it was small, it compared YAG lasers to a sham instead of other treatment options, and the follow up period after which the researchers checked on the patients to see how they were doing was relatively short, only six months. It also might not reflect what the treatment would really look like in a clinical setting, and probably can’t be generalized to all floaters, but just to the specific cases they treated. Those include much larger floaters more common in old people that come with flashes in vision and other symptoms. 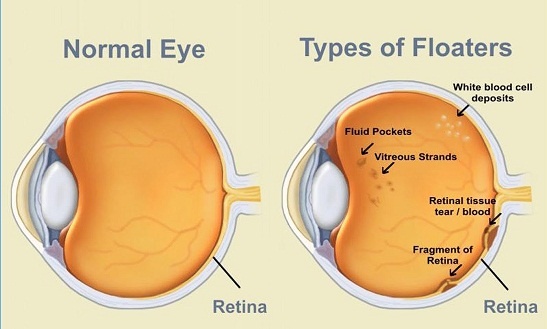 But one expert, Jennifer Lim from the Illinois Eye and Ear Infirmary at the University of Illinois at Chicago, wrote in a comment that a lot more research is necessary before declaring the treatment safe. The authors of the new study selected their patients carefully, which could have aided to their study’s success. She also noted the short follow up period meant some long-term adverse effects could be missed. “Despite a reported low rate of complications, it was not proven that YAG vitreolysis is a safe procedure,” she wrote.

So maybe we’re not ready to start busting floaters with lasers just yet. Plus, if they’re not giant rings, I actually find watching my floaters quite relaxing.