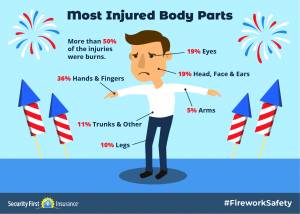 Thousands of people, many of them children, suffer eye injuries from fireworks each year in the United States. In the most severe cases, fireworks can rupture the globe of the eye, cause chemical and thermal burns, corneal abrasions and retinal detachment — all of which can permanently cause eye damage and affect vision.

According to the most recent fireworks injury report (PDF) from the U.S. Consumer Product Safety Commission, fireworks injuries in the in the United States caused nearly 10,500 injuries requiring treatment in emergency rooms. The report also showed that nearly 1,300 eye injuries related to fireworks were treated in U.S. emergency rooms in 2014, more than double the 600 reported in 2012.

NWEC advises that the best way to avoid a potentially blinding fireworks injury is by attending a professional public fireworks show rather than purchasing fireworks for home use.

For those who attend professional fireworks displays and/or live in communities surrounding the shows:

For those who decide to purchase consumer fireworks because they live in states where they are legal, the Academy recommends the following safety tips to prevent eye injuries:

What to do for a fireworks eye injury

If an eye injury from fireworks occurs, remember: