Did you know that an eye exam can be the first clue to detecting diabetes and other hidden health concerns? Finding health issues early can give patients a better chance at preventing damage through early treatment and management. 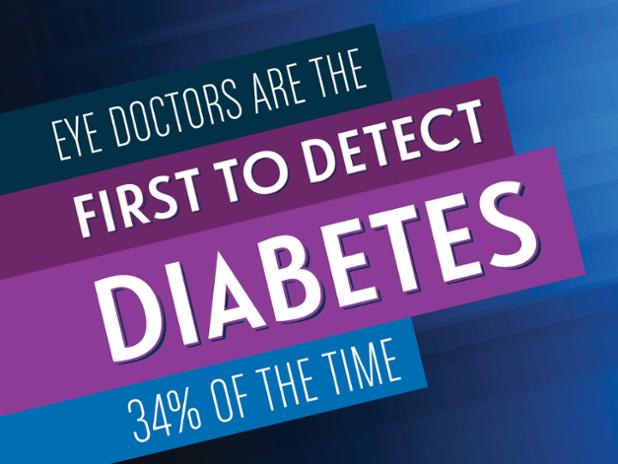 A routine eye exam can show so many things. Some can be downright life changing – and life-saving – for that matter. One doctor found out first-hand when she did the same thing she does every day – she looked into a patient’s eyes. But this was no ordinary exam.

When Kathleen Clary, OD, peered into her 48-year-old patient’s eyes, she saw blood and other fluids seeping out of fragile and miniscule vessels in her retinas. The retina is the light and sight-sensing back part of the eye – and without it, you don’t see.

“As soon as I noticed the leaking fluids and the hemorrhaging, I suspected that they might be symptoms of diabetes,” recalls Dr. Clary, who practices in the Washington, D.C., suburb of Ashburn, Virginia. “In my 12 years of experience as an eye doctor, that kind of bleeding usually signals that a buildup of sugar in the patient’s bloodstream has begun to break down the capillaries that feed the retina. The result is often what we call diabetic retinopathy – a condition in which continuing damage to retinal tissue from diabetes can lead to impaired vision or even blindness, if left untreated.”

The eye exam was the very first clue the patient had that she might have diabetes.

Dr. Clary talked with her patient about what she saw and explained what it could mean. “I want you to have your blood sugar level checked right away by your family doctor,” she told her patient. “Tell the doctor you need to be evaluated for diabetes with a fasting blood sugar test, because your optometrist noticed some retinal bleeding.”

Dr. Clary was right – a medical exam the next day did indeed show the patient had diabetes. What’s more, her blood sugar level was more than quadruple what’s normal. Insulin therapy and a new approach to diet and exercise came next.

Fast forward a few months, and you’d find a much happier Dr. Clary – and much healthier patient. “The retinal bleeding had stopped, and her eyesight had begun to improve,” says the Virginia doctor. “I think her vision has very likely been spared because she was able to catch her uncontrolled diabetes in the early stages, before major damage to her retina.”

Dr. Clary calls it, “a very encouraging outcome. I’m glad I was able to help this patient protect her eyesight. That retinal exam really made a difference – and it’s a good example of why I tell patients that a yearly eye exam can protect your vision and your health!”

Extra Focus on Vision for Those with Pre-Diabetes

“Right away, I found two tiny spots of blood in the retina of one eye,” he says. “Those blood spots were a sure sign of diabetic retinopathy.”

Roughly 90% of diabetes-related blindness can be avoided by getting an annual eye exam. Make that all important appointment with your VSP network eye doctor today!

Recent health studies reveal that as many as 24,000 people lose their sight every year to diabetes and diabetic retinopathy, the leading cause of blindness in the U.S. Here are some other surprising facts about diabetes.